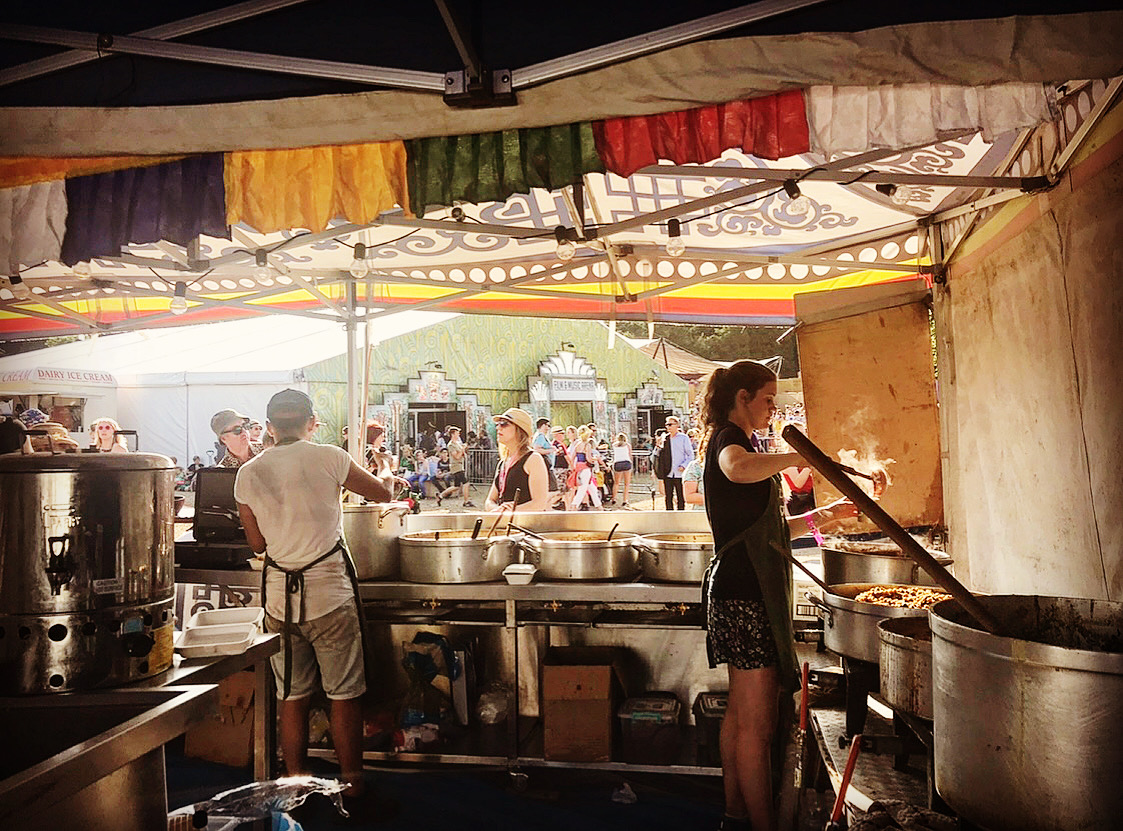 The glamorous life of the jet-setting, award-winning restauranteurs/published authors Julie and Yeshi, as featured on BBC1’s Saturday Kitchen, on R4 and in your Saturday Guardian Magazine – and the Daily Star.

Let’s strip it back. We closed the takeaway on Saturday evening to make way for six weeks of festivals. A really hard decision! We don’t want to shut – we hate to think that there will be people driving in from far afield only to find the doors closed.

Also, it’s not really six weeks of festivals. That sounds a lot more fun than it really is. We’ll be at three festivals during this period of closure. Setting up and taking down account for many other lost days, but mostly there will be extreme momo-making happening in the in-between times.

And festivals – here’s the reality. I spent all of last week researching raised floor options for our stall – not something we’ve had to do before, but a requirement for Glastonbury (you may have heard about the mud). The flooring has to be non-slip too: I’ve learned a lot about vinyl and rubber matting over the last seven days.

We’re also on new ground with our upgraded fridge trailer. Have you ever had to look into legal towing limits? And how do you insure a trailer? This is my territory, whether I like it or not.

More adventures we’ve been on during the last fortnight: do you know about the nationwide shortage of gas cylinders? Something to do with people having more outdoor gatherings than usual 💁🏻‍♀️. We used to order in as many as we needed and give them back as they emptied. Now you can only procure them if you have one one to swap. Yeshi hit west London the other day on a mission to buy empty cylinders – who knew these things were worth so much without even a drop of gas inside?

Then there were the fifty cases of food boxes, forks and napkins we ordered in last week. The DPD man dumped them at our home address instead of the restaurant, even after we refused by phone to have them delivered there. They obliterated the front garden, and had to be moved again of course (last laugh was on us though, as DPD had to return again the following day: our supplier has changed one of their products for one that is no longer right for us).

All the while, we filmed a butter tea video tutorial for Epicurious, partially re-recorded a podcast (on Australia time) that had suffered a technical fail, wrote a feature for someone else’s upcoming cookbook (in Hong Kong), ran a momo-making class for Milk Street Cooking School attended by over 300 people all over the world, promoted our event in London tonight, paid our bills, ran our takeaway… and so on.

Someone told me recently that they’d started making a “done” list alongside the “to do”. This post is my way of making sure that some of the more thankless tasks don’t get lost in the excitement.

Our weekly check-in will likely fall away over the next while. This one is really just a reminder that our restaurant is closed for the time being. At the moment, our reopening date is looking like Friday 1st July. Follow us on social media to keep up-to-date.

Wishing everyone well over the next few weeks, and if you’re at Wood Festival, Hay Festival or Glastonbury, make sure to come and have a momo!